Reminder: Make sure to check the country’s covid guidelines before travel.

Curious about Costa Rica? When I was first planning my trip to Costa Rica the first thing I wanted to do was know all of the things about Costa Rica before arriving there. After we left we realized we knew almost nothing about this beautiful country, I went in knowing what everyone knows like Costa Rica is known for its lush rainforests, incredible biodiversity, pristine beaches, and welcoming locals. In this article, I will dive into fun facts about Costa Rica including culture, food, attractions, geography, and more!

1. What does Costa Rica mean?

2. Where is Costa Rica located?

3. What is the official currency of Costa Rica?

4. What is the official language of Costa Rica?

5. What time zone is Costa Rica in?

6. Does the sunrise really early in Costa Rica?

8. What is the capital of Costa Rica?

10. Is there a best time to visit Costa Rica?

11. What plugs are used in Costa Rica?

13. The country’s slogan is Pura Vida

16. Small family-owned restaurants are referred to as sodas. These restaurants typically serve rice, beans, or chicken for under $3.

17. Is the water safe to drink in Costa Rica?

18. How long can I stay in Costa Rica without a visa?

1. What is the highest elevation in Costa Rica?

2. Does Costa Rica have good beaches?

3. Does Costa Rica have active volcanoes?

4. Costa Rica is a leader in renewable energy.

5. Nicoya is one of the 5 Blue Zones in the world!

6. How many national parks are there in Costa Rica?

7. Costa Rica is the second-largest exporter of bananas in the world!

8. More than 25% of Costa Rica’s land is dedicated to reserves, wildlife refuges, and national parks!

9. Isla del Coco is the largest uninhabited island in the world!

1. Costa Rica has 5% of the world’s biodiversity with only 0.3% of the total surface area of the planet.

2. Wild Sloths are a thing in Costa Rica

3. Monkeys are one of the most common animals in Costa Rica outside of bats!

4. What is Costa Rica’s national animal?

5. What is Costa Rica’s national bird?

6. Are there dangerous animals in Costa Rica?

7. Wait, what is the Jesus Christ lizard?

2. Speedbumps have a unique name and I laughed REALLY hard when I heard it: son muertos or dead persons. I gotta love a dark sense of humor.

3. Costa Ricans refer to their partners as “the other half of the orange” or media naranja.

4. You can see the sunrise and sunset in one day

5. Gambling and prostitution is legal in Costa Rica

7. Costa Rica has over 2 million tourists each year! Costa Rica’s leading industry is tourism and it’s easy to see why with all it has to offer!

8. Residents in San Jose aren’t allowed to drive into the city one day during the week, this rule was created to minimize pollution that is caused by vehicles!

WELL, WHAT DO YOU THINK?

PLANNING A TRIP TO COSTA RICA?

We love it so much that we have been 3 times! Check out our other detailed Costa Rica guides to have you completely prepared for your trip! 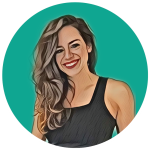 I’m Sam and I may only be 5’3 but I’m feisty and enjoy a lot of sarcastic humor. I’m addicted to travel as well as feeding and advocating for street animals in every country I travel to. I’m married to Courtney and we’re super gay or whatevaaaa. We’re both extroverts and love meeting new people everywhere we travel. We are in love with Latin American culture but can’t wait to explore more of the world! 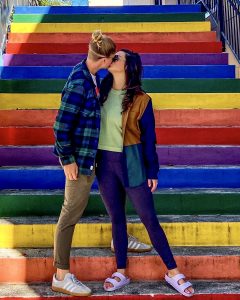 Hi, it's Sam and Courtney!

We are a LGBTQ couple who took a leap and quit our jobs to travel for a year! We are passionate about travel and we hope to share our story and inspire other travelers to see the world in a sustainable and affordable way. We invite you to come along with us on our journey!